It’s that time of year again. When you’re not party planning or putting your costume together, you’ll no doubt be settling down on – or behind – the sofa for a horror flick or two this Halloween.

The stories are familiar. Troublesome poltergeists terrorising a family home, a masked killer creeping into the house by night, a demonic portal behind a wall in the basement – you name it. And while a few characters emerge from these gruesome ordeals unscathed; their properties certainly don’t.

What we never see when the credits roll is how the pieces are picked up in the aftermath. We couldn’t help but wonder; for those fateful protagonists who dare return, what would be the cost of putting things right? For 13 of your favourite horror films, we’ve totted up the damage caused and used actual claims data to estimate the payout for each. Can you guess what’ll come out on top?

Supernatural-horror Insidious tells the tale of the Lambert family. Following an accident, their son’s comatose body becomes a vessel and getaway for all manner of demons and evil spirits. With the family and the house itself coming under attack; they move elsewhere – only for the violence to continue.

Across the two homes, the demons manage to rack up a whole lot of damage, with the Lambert’s contents bearing the brunt. By the end, the Lamberts would have claimed £1,037 to replace their possessions, though ‘damage via demonic entities’ probably wouldn’t be covered by their contents policy. 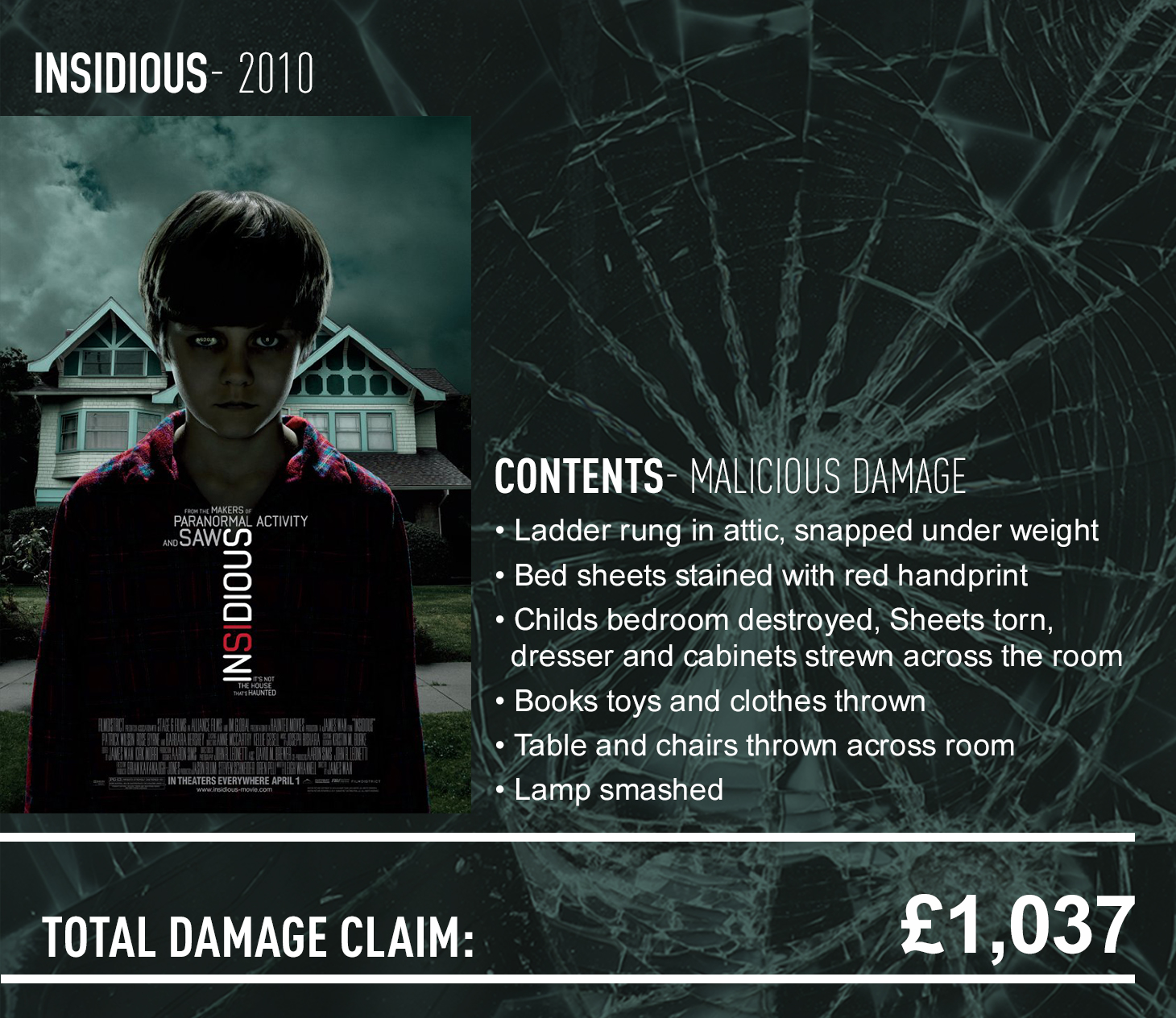 Modern slasher Hush follows a truly terrifying night for deaf author Maddie Young, who happens to live alone at an isolated house in the woods. After realising she’s being stalked by a masked man, Maddie opts to lock herself inside the house (typical) before a murderous game of cat and mouse ensues.

In their blood-drenched fight to the death, Maddie’s house takes a battering. Window panes are scratched, then the front door is smashed in before the man breaks through a bathroom skylight in a last ditch bid to kill. Once the blood-stained-beyond-repair hard wood floors are accounted for, Maddie’s claim totals £2,416. 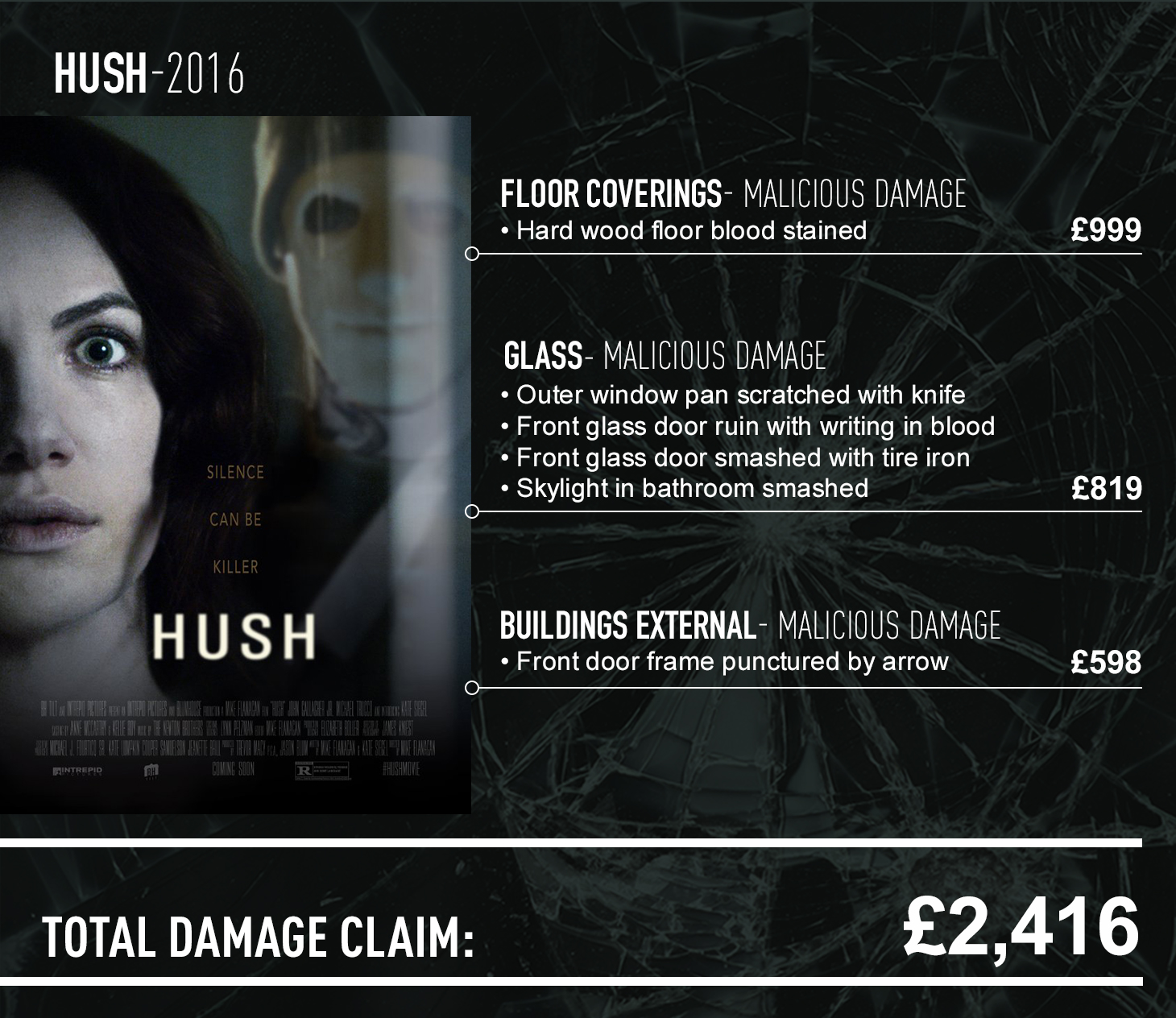 This comedy-horror classic sees an adorable Mogwai named Gizmo end up in the hands of Billy. Gizmo comes with three simple safety warnings; don’t expose him to sunlight, don’t get him wet and never feed him after midnight. So guess what happens next?

A series of errors see the otherwise harmless fluffball sprout an army of destructive and murderous gremlins. Their rampage causes havoc across town, with Billy’s house taking a hit. Damage includes a broken microwave and blender and culminates in a gremlin smashing through the garage door with a digger. To say he’s largely to blame for the town’s terror, Billy gets off rather lightly, with his insurance claim coming in at £3,987. 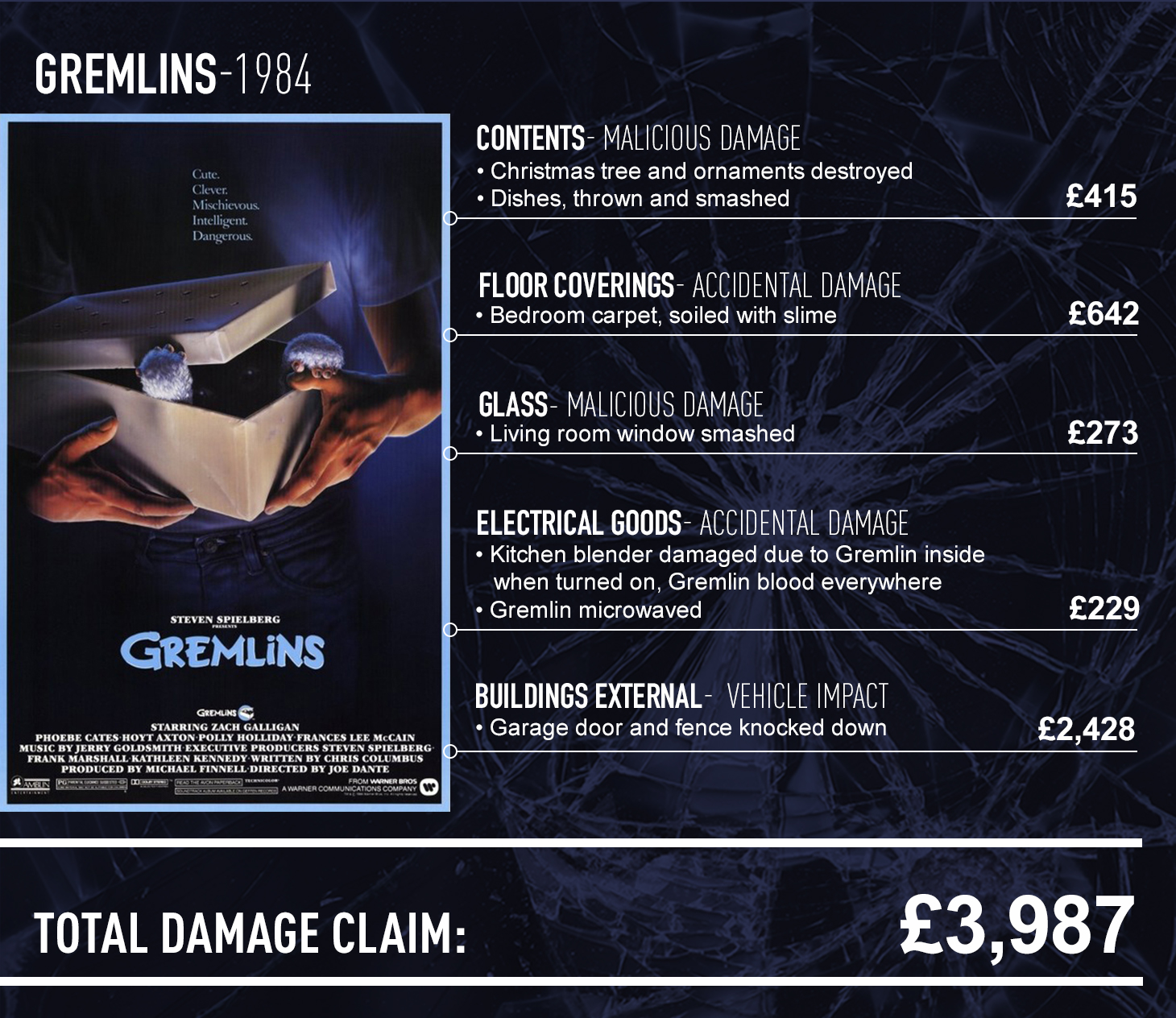 At number ten, Sinister opens with a slightly different premise to your usual horror-haunting flick. True crime writer Ellison Oswalt does know a family were once murdered in his new home, but he moves his in regardless, intending to use the story as inspiration for his next book. Right.

After finding reels of murder footage in the attic, the family make the sensible choice to flee the house – only to find that they’ve now put themselves in grave danger. In the massacre that ensues, the house certainly doesn’t escape unscathed. There’s a £2,423 pay out for dealing with the blood-soaked floors, walls and doors alone; contributing to a total claim of £4,894. 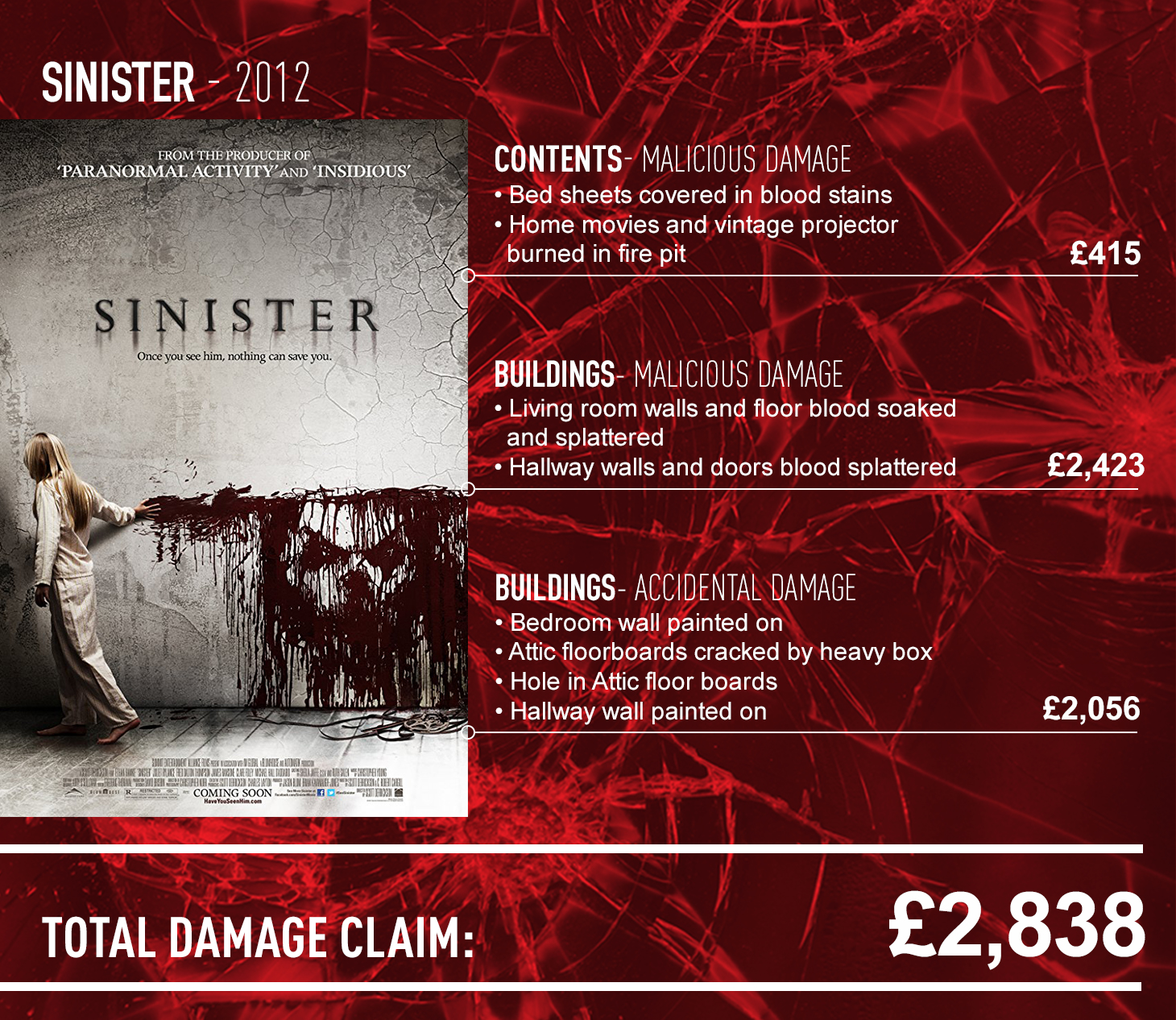 One of the highest-grossing horror movies of all time, the Conjuring depicts real-life paranormal investigators Ed and Lorraine Warren as they come to the assistance of the Peron family, who are experiencing disturbing events in and around their Rhode Island farmhouse.

As hauntings and possessions take hold, the house takes a beating. There’s £1,245 of malicious damage to claim for, including those token blood-stained bedsheets, as well as £2,056 in damage to buildings internal. Once windows, floors and exterior damage are accounted for, their total claim comes in at £5,306. As far as cinema’s home-harming ghouls go, the Peron house got off lightly. 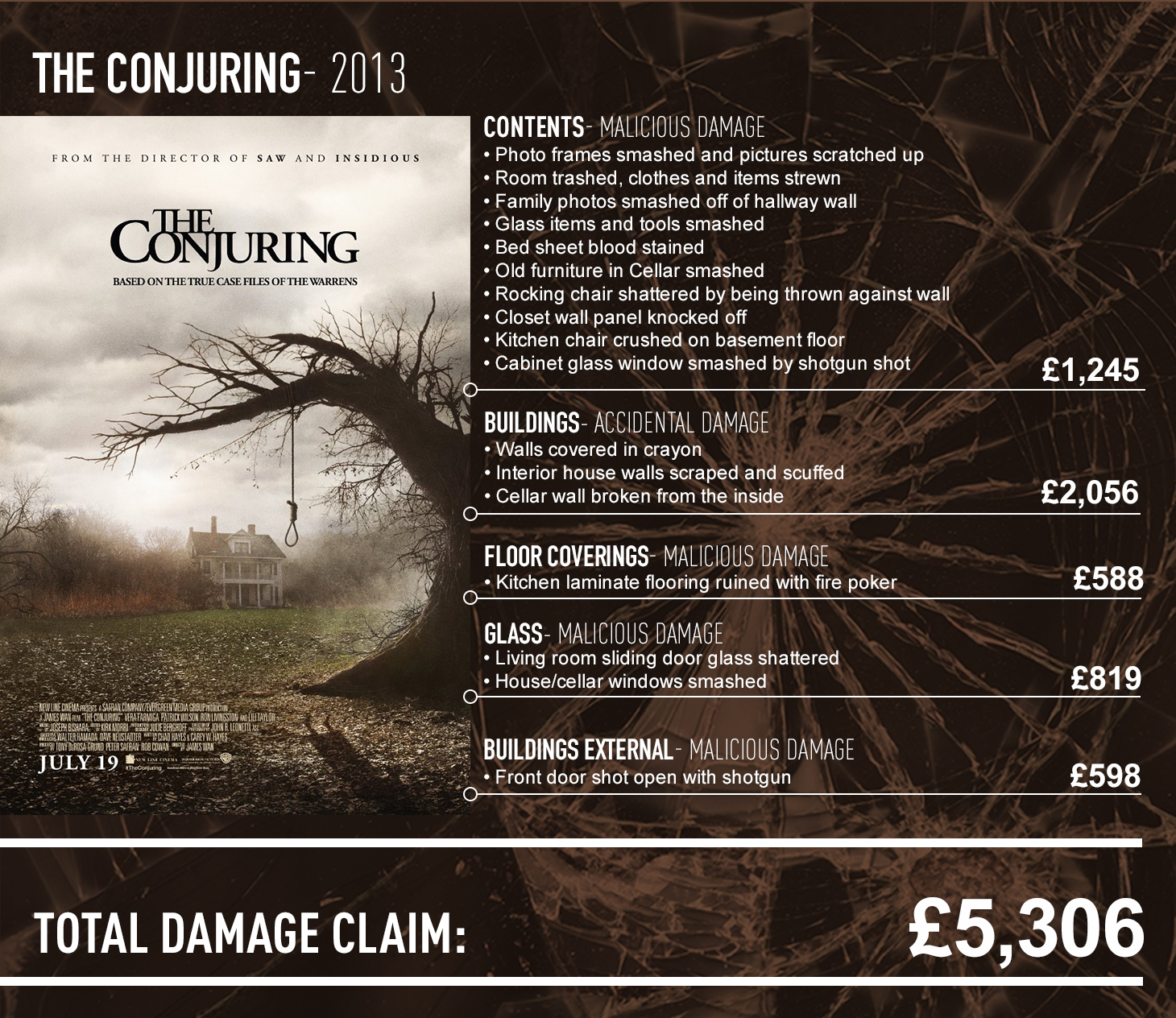 Sir Alfred Hitchcock’s iconic horror-thriller sees the real-life town of Bodega Bay terrorised by – you guessed it – birds. Through their inexplicable bloodlust, they manage to traumatise the townspeople; killing and injuring several before they take aim at the Brenner family home. With the family holed up inside, the flock manages to ravage much of the house after clawing through the front door and tearing through the ceilings.

When the time came to claim, the Brenners would certainly be relieved they took a policy out. From £273 on repairing broken windows to £3,634 patching up holes in the roof and ceiling, they’d be looking at a total of £7,954 worth of damage. 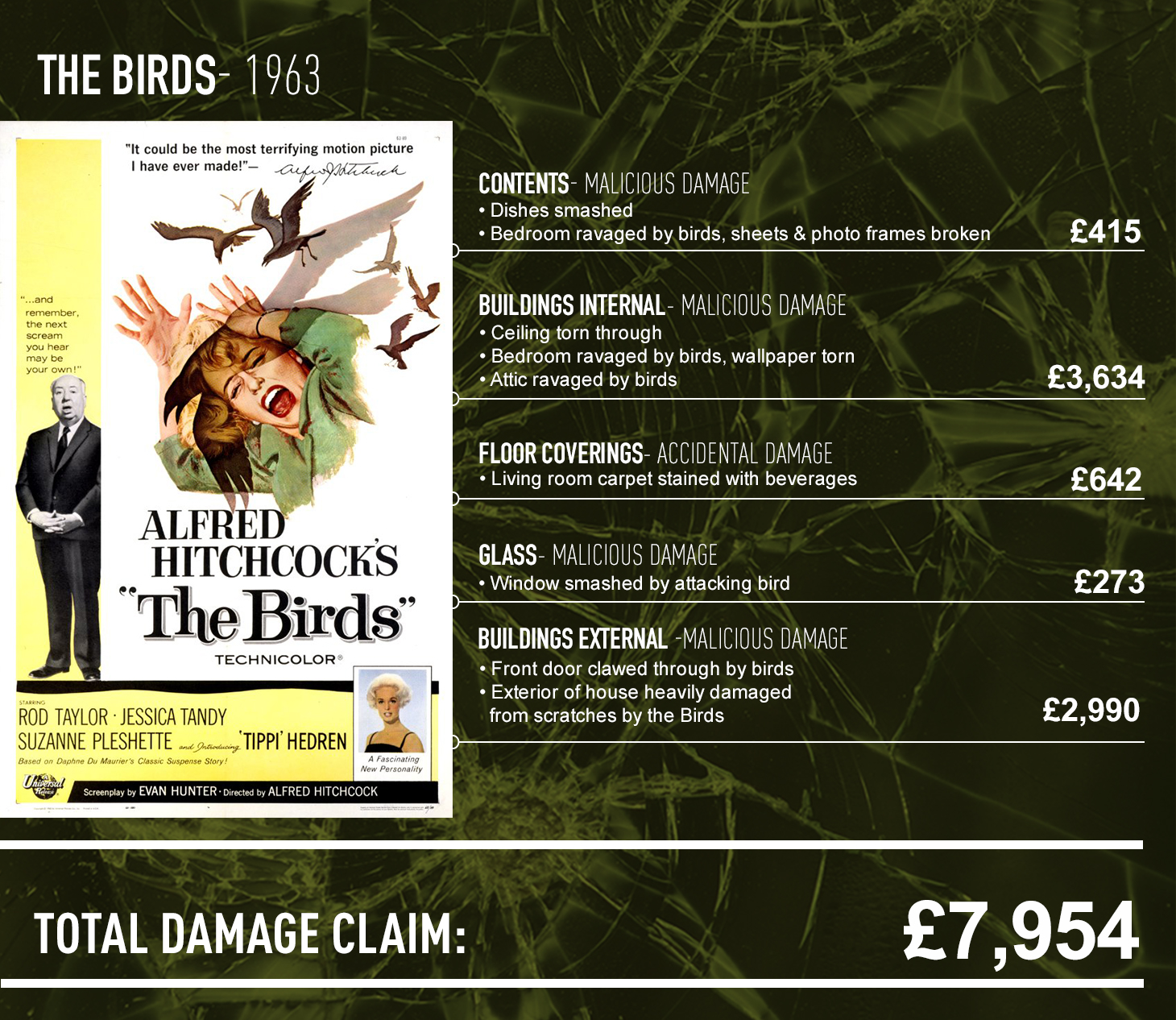 In a dystopian, modern America, an event known as ‘The Purge’ takes place annually. From 7pm on the 21st March until 7am on the 22nd, all crime is legal. Family man James Sandin is a top salesman for a security systems company specialising in Purge Night protection, so you might assume his house - and loved ones - would be safe. But that wouldn’t be a very interesting film now, would it?

To begin with, there’s £598 worth of damage incurred when a murderous gang yank off the house’s steel doors. Before sunrise, the house sees £2,997 in blood-stained flooring alone, and the Sandin’s claim comes in at a hefty £8,704. 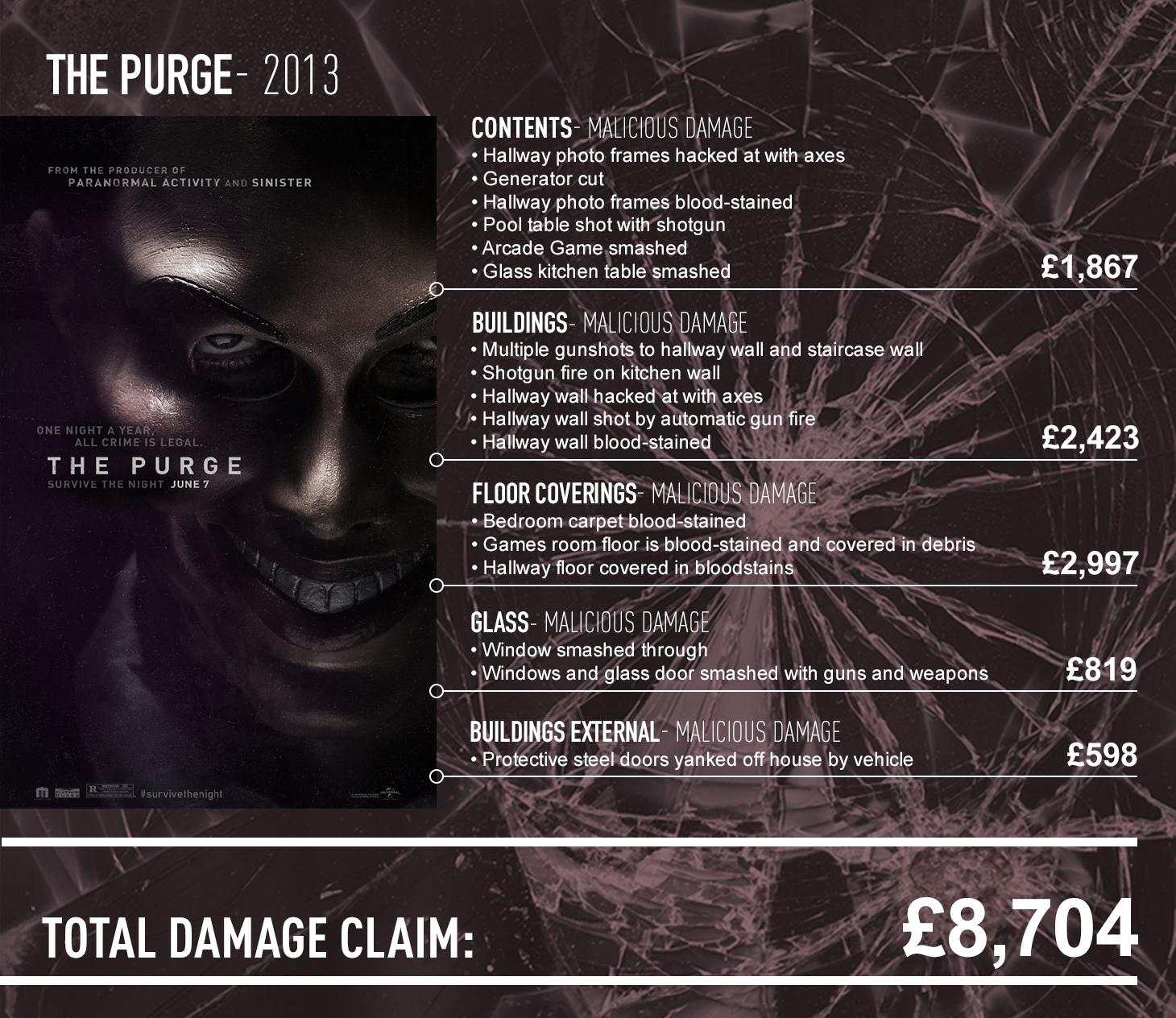 A home invasion gone wrong leads to a fatal night for a trio who make a living breaking into houses. The three plot to burgle a blind man, who they believe has $300,000 in his possession.

Unfortunately for them, the man isn’t going to go without a fight. There’d be £1,092 in claims for broken windows alone, and bullet holes though the floor account for a further £999. And though the man’s contents get off miraculously lightly, with just £644 to claim for, it’ll take a pay out of £8,902 to get the house back in order. 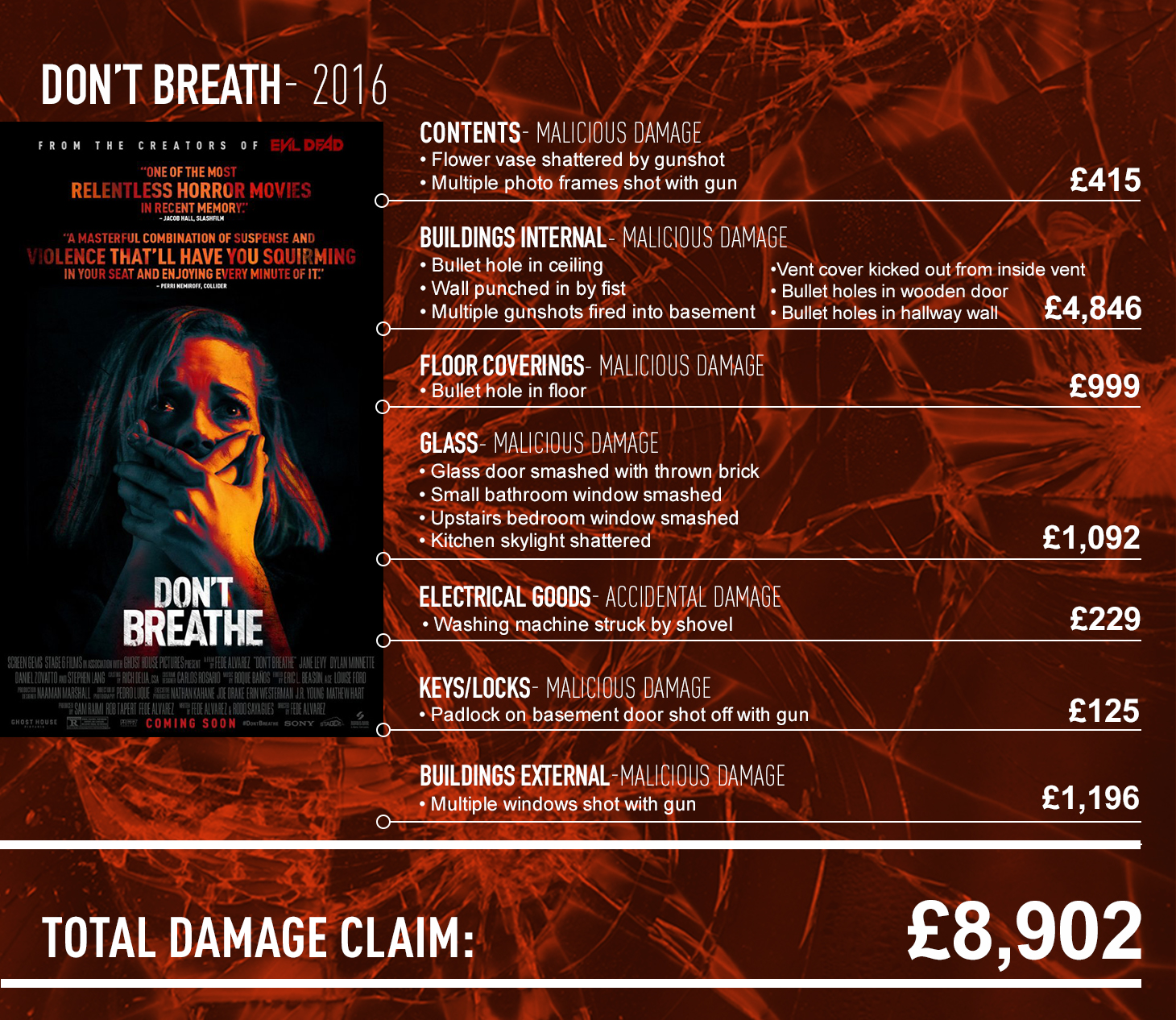 In at five is this 2005 remake of a classic. It’s a true story, as alleged by George and Kathy Lutz, who moved into 112 Ocean Avenue in Amityville year before, Ronald DeFeo Jr murdered his entire family in the house. What follows is a tale of inexplicable events, paranormal activity and spiritual possession. 28 days after moving in, having barely survived their ordeal, the Lutz’s leave and never return.

Blood splattered wallpaper and a bullet-laden wardrobe door contribute to a £4,846 claim for malicious damage to the building’s interior, as well as £1,998 worth of damage to floors and £622 of contents in need of replacement. All-in-all, the Lutz’s would be looking for a pay out of £9,260. Assuming they intend to return of course – we wouldn’t count on it. 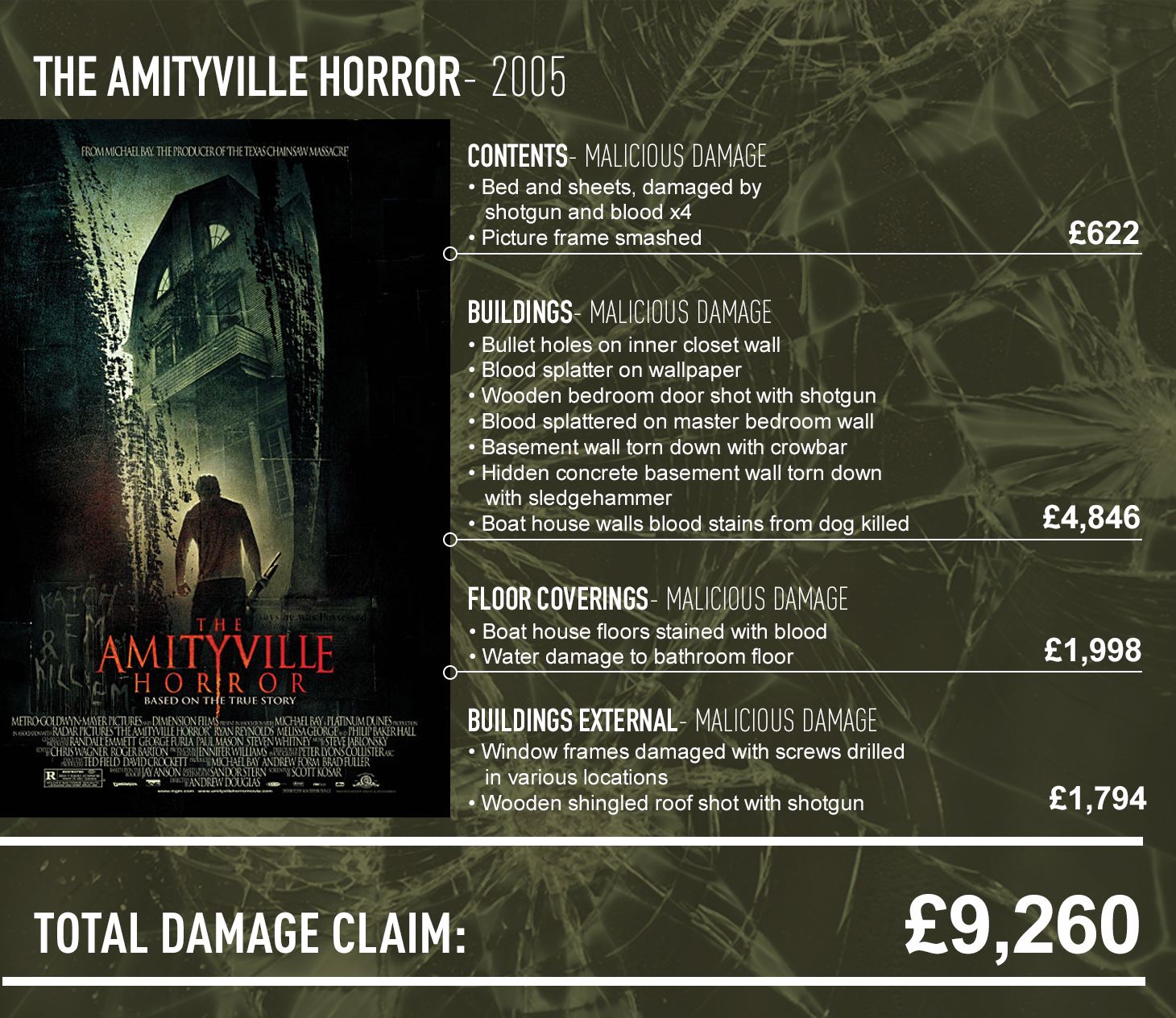 In at number 4, a group of teenagers are plucked off one-by-one, as child murderer Freddy Krueger hunts and murders them in their own nightmares. In a last ditch bid to make the deaths stop, Nancy Thompson pulls Freddy from her dream into the real world, planning to trap and kill him in her heavily booby-trapped house. And it goes to plan, for the most part.

Capturing and executing a serial killer is going to cause some serious damage; there’s £546 in broken windows, but that’s the least of the Thompson house’s problems. As Nancy sets Freddy alight, the house endures extensive fire damage, rendering it uninhabitable. They’ll be needing £17,900 in repairs on the property, as well as £7,547 to cover alternative accommodation. All in all, their home insurance claim is a whopping £26,408. 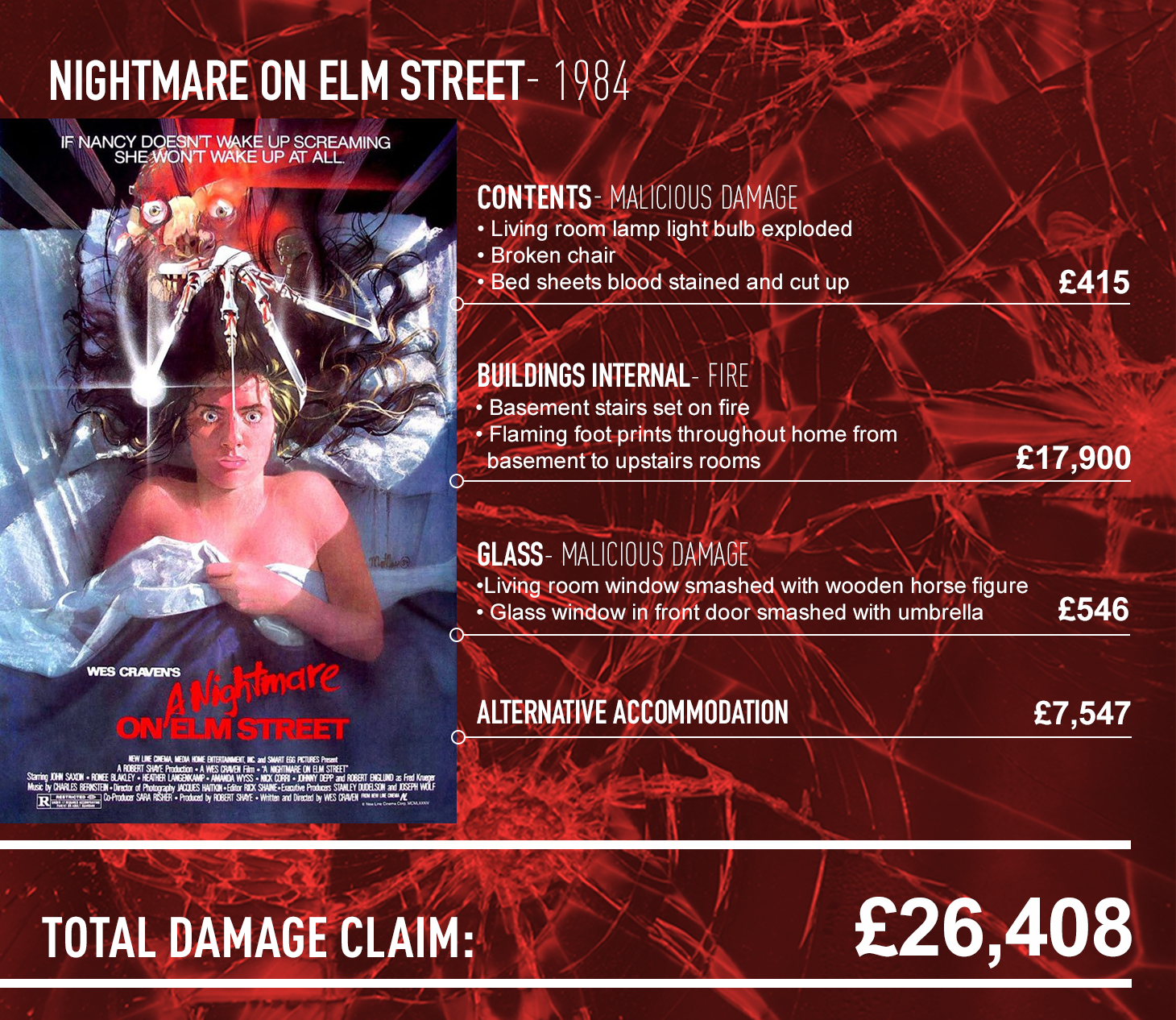 It’s not unheard of for horror sequels to go bigger and better than their predecessors, and here The Conjuring 2 manages just that. This time, Ed and Lorraine Wilson are on British turf as they come to the aide of the Hodgson family, who are experiencing poltergeist activity in their Enfield council house. Based on a true story, a twisted tale of demonic possession and poltergeist terror ensues.

The only thing left more traumatised than the Hodgsons is their family home. With burst washing machine pipes, blood-soaked bedding and almost every room trashed, their contents claim would come in at £2,075. Then there’s the eyewatering £21,115 claim for the flooded basement and the £10,000 cost of alternative accommodation while these are seen to. Overall, they’d be looking at a £49,125 claim. 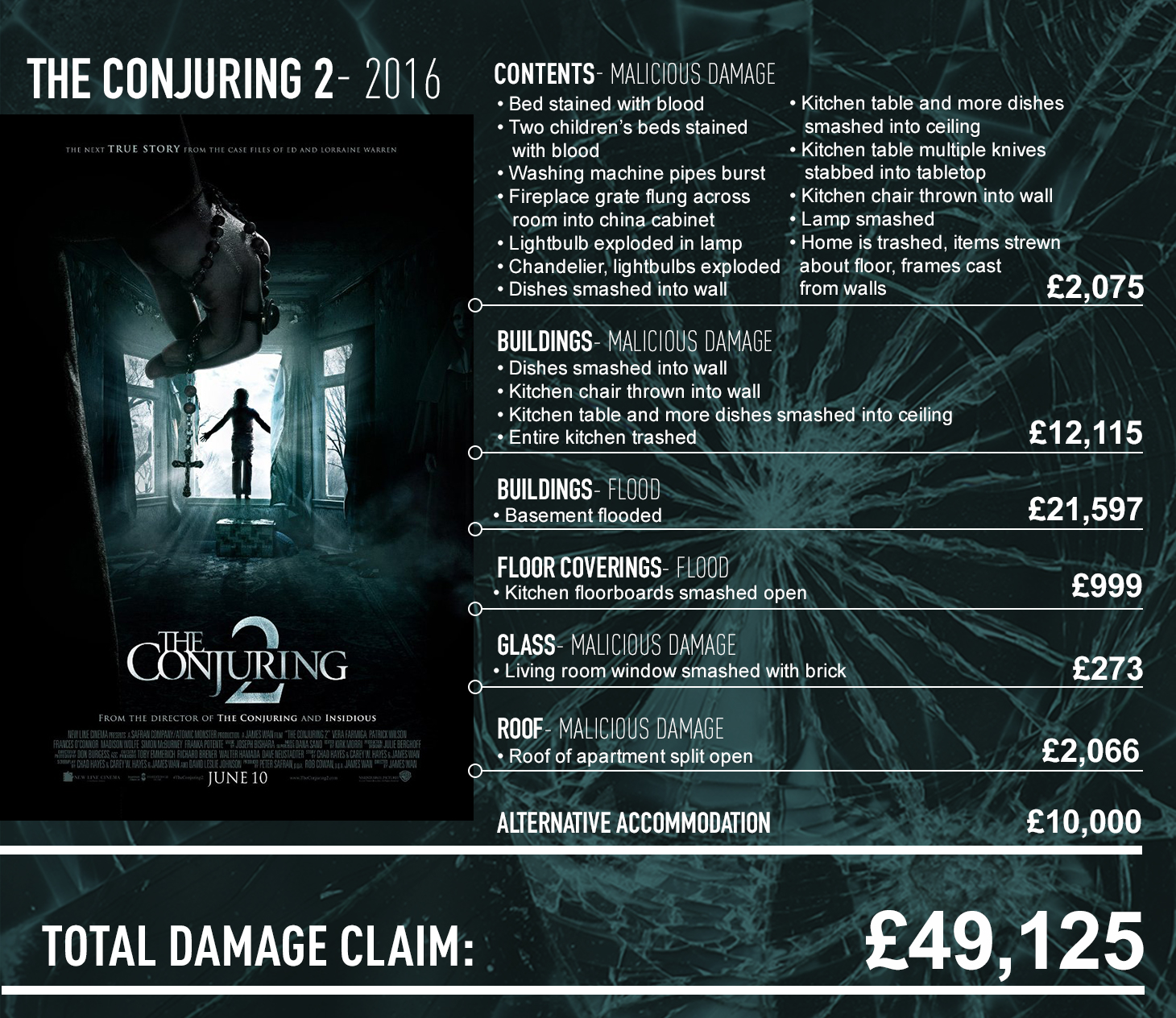 In this post-apocalyptic flick, we see virologist Robert Neville roam an abandoned and crumbling Manhattan. A virus intended to cure cancer has gone drastically wrong, killing 95% of all mankind and leaving only 1% immune. The other 4% have evolved into predatory, violent mutants.

The mutants follow Robert back to his otherwise spectacularly-well fortified house, causing Robert to detonate a series of bombs surrounding the house and in turn cause £50,013 of damage to his property in the process. As the mutants rip through the house they cause a further £4,846, while a retreating Neville eventually detonates a grenade in the basement and sacrifices himself. If Robert were still around to claim, he’d be looking for a hefty £66,097. 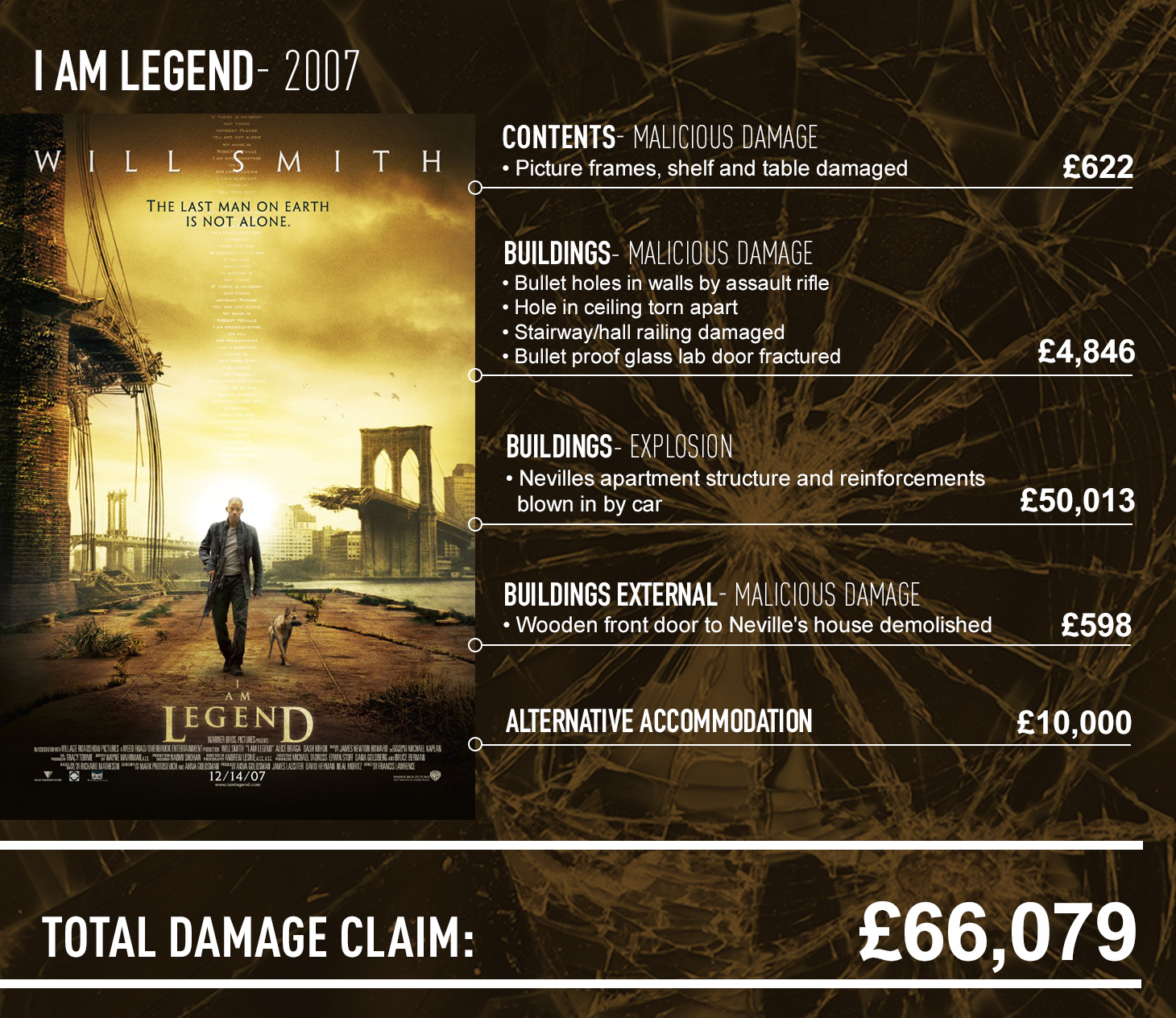 In this Steven Spielberg classic, Steven and Diane Freeling - and their three children - are traumatised by a collective of poltergeists. Among the mayhem, daughter Carol Anne is sucked through a portal in her closet and held captive in another dimension by a demon, requiring a nail-biting rescue. When we later discover the house has been built over an ancient cemetery, it goes someway to explain the horrifying hauntings.

Understandably, the house racks up a fair bit of damage; frames flung from walls and lamps blown off tables amount to a £1,245 claim – while floors being soaked in ectoplasm and coffins rising through the kitchen tiles requires £1,998 to fix. All this pales in importance as, when the Freelings prepare to leave, the house implodes on itself and disappears through the portal. 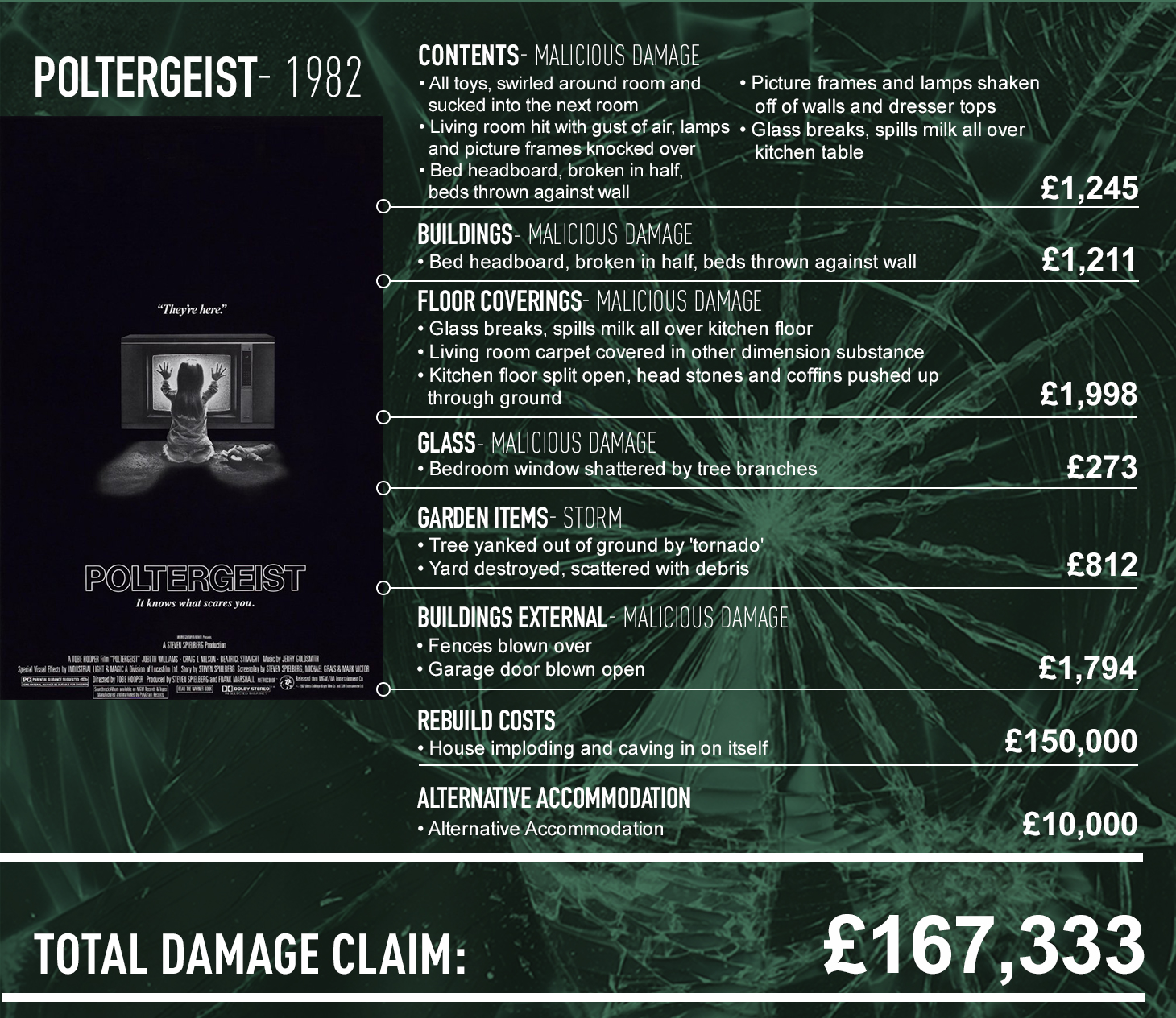 After claiming £10,000 for alternative accommodation, the family would require a payout covering their home’s entire rebuilt cost, as well as architect’s and surveyor’s fees. In total, the Freelings would be looking at a monumental £167,333 insurance claim. 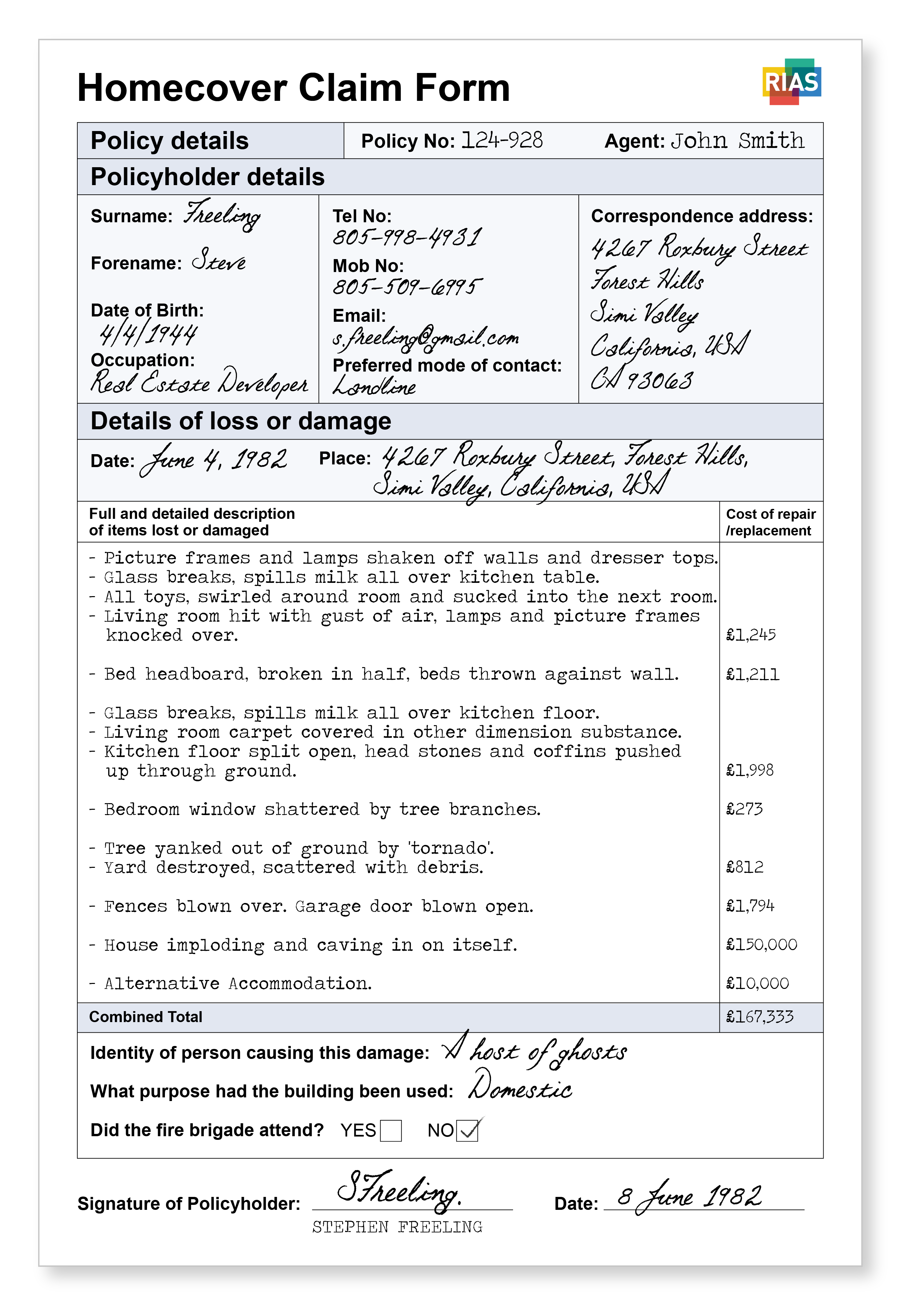 Should they ever wish to return, our horror movie heroes are looking at some serious costs to get their homes habitable, so we certainly hope damage by demon is covered by the insurance policy.

In reality, it goes without saying that we don’t really protect against ghouls, ghosts and ghastly things; so keep the horror on screen this Halloween! 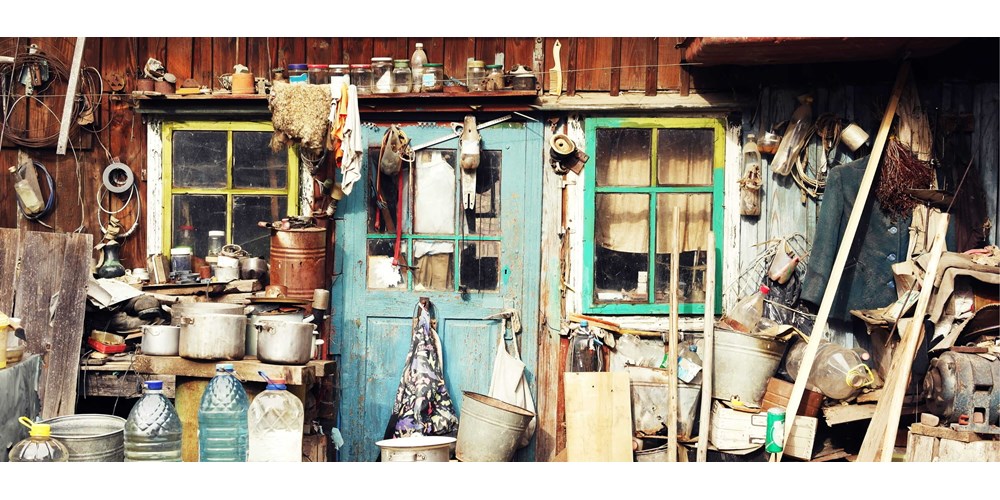 Getting on top of your clutter 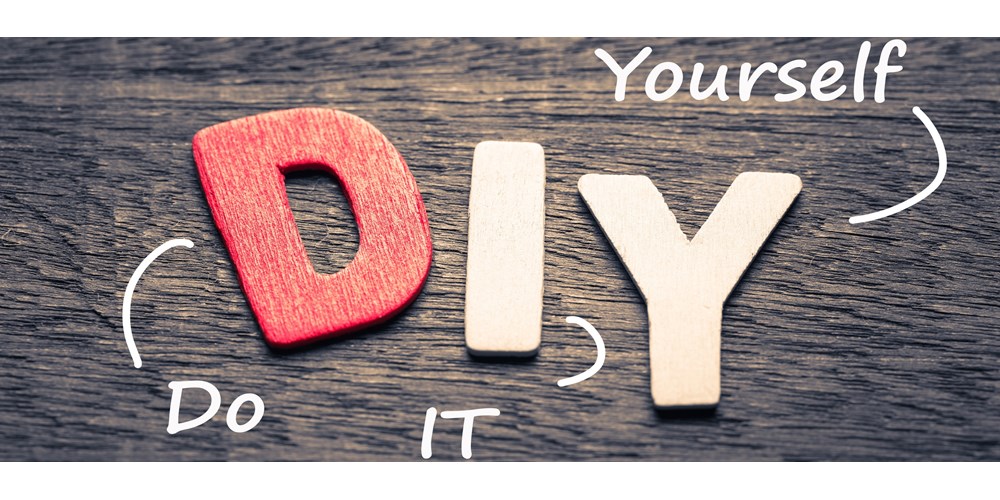